Jacob Elordi, star of the critically acclaimed international smash hit Euphoria on HBO, is the newest brand ambassador for the Swiss luxury watch brand TAG Heuer. The young actor will represent the TAG Heuer Monaco, and as the face of the collection, Elordi will represent an equally daring and instantly recognizable timepiece. Square-cased Monaco, like Elordi, rewrote the rules, defied convention, and became timeless precisely because no one had ever seen anything like it before.

And while “Euphoria” has catapulted Elordi’s career into the stratosphere – the groundbreaking teen-centered show is the second most-watched in HBO’s history, behind only “Game of Thrones” – it’s his throwback style off-screen that truly sets him apart, favouring a mid-century preppy button-down hip that’s sharp yet understated, curated yet classic, and recalls such greats as Marlon Brando

“We are ecstatic to announce Jacob Elordi as the new ambassador for TAG Heuer Monaco. He is the standout star of a new generation, a risk-taking artist who accepts challenging roles for himself and his audience. In addition, he is a complete individual with a strong sense of timeless style. The TAG Heuer Monaco became the watch for a new generation when it was introduced in 1969, and there is no better representative for it as each new generation continues to discover it, according to TAG Heuer CEO Frédéric Arnault.

“I’ve always been drawn to classic and timeless objects, so collaborating with TAG Heuer was ideal for me. I’ve always admired Hollywood’s iconic leading men, so wearing the Monaco — a watch made famous by Steve McQueen — is a unique experience. Add Elordi to this exciting news. TAG Heuer has been the epitome of elegance and excellence for over 160 years, and it’s thrilling to be their representative for the next generation. 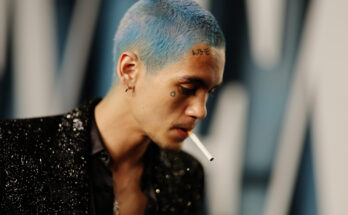 Zendaya shares a sweet photograph with Tom Holland on his birthday